Red Hill is a brewery that grows it’s own hops on the Mornington Peninsula in Victoria. It produces a core range of European style beers that are all about sessionability and accessibility. Don’t go looking for some 100+ IBU IPA’s. What you will find are Belgium strongs, Christmas beers, Pils, a stout and wheat beers. They also make a Scotch Ale which with the exception of the offerings from Redoak will round out all the Australian beers in the 1001 beers challenge.

According to The Oxford Companion to Beer Scotch ales are the heavier version of Scottish ales and can be known as ‘Wee Heavy’. Traditional Scotch ales were made with malt that had been smoked over peat to give it the smokey flavour but this is not limited to how beer was made in Scotland. It happened in many different countries but the idea of this won’t go away and I suspect that it is linked to Scotch whisky from places such as Laphroaig which are famed for their peaty smokey flavours. 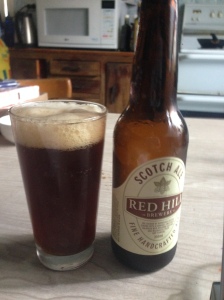 Red Hill first released the Scotch Ale in 2005 and has taken seven years to perfect. The beer comes out at 5.8% which equates to 1.6 standard drinks.

The beer itself is a cooper colour with a creamy whitish yellow head that it both tight and persistent.

This beer is more muted on the nose then other scotch ales I have tried, probably because it has a more reasonable alcohol level then other beers I have tried. There is still a pleasant alcohol sort of warming smell and the sweetness of the malts that makes me interested in tasting the beer.

The taste is one that definitely lingers and, like the smell, is definitely muted in comparison to other scotch ales I have tried. This doesn’t make it a bad beer, in fact it is refreshing to taste something that isn’t trying to be the biggest baddest beer on the playground.

There are bits of toffee and just a little touch of smokiness that gives way to some nice bitterness in tail which gives this beer some longevity.

I would recommend this to people who are looking to get into the the Scotch Ale style but are having some trepidation.

If this doesn’t get you onto the Red Hill train, check out their hoodies, they have some pretty good ones up for sale.