You know that time when you restart something there is always a little bit of dread about it. You probably won’t be able to run as fast, finish a task as quickly as you used to or in my case colour inside the lines as well I used to.

Well this dread applies to starting to write about beer again… It has been a long time and I kind of felt like I ran out of things to say so I stopped for a time but you know it got to that point where I sort of missed it so here we go again and what better beer to start with again then the Little Creature’s winter seasonal offering, 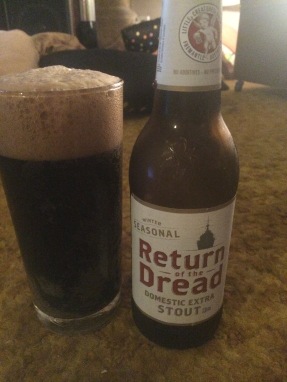 The Return of the Dread owes it’s existence to the first Little Creatures Single Batch, The Dreadnought which was a massive 7.4% dark beer that was enormously popular and for a good reason, it was an excellent dark beer. The second coming of the Dreadnought is slightly muted in it’s 330 Ml form at 7.2% but it is still dark with a strong coffee coloured head which stuck around for a time.

My first piece of advice is leaving this out of the fridge for about 20 minutes, you will get a much better tasting experience if you don’t have it straight from the fridge. This beer is all about the dark roasted malts will give a delicious treacly taste which is very fulfilling and so well balanced as beer that despite being a stout it is very drinkable without that harshness you can sometimes get on a stronger stout. It leaves slightly bitter dark chocolate with some vanilla notes that linger at the very end of the beer

So while this beer is not the Dreadnought it is still a very solid and very enjoyable stout which you can pick up from any of the better big bottle shops like a Dan Murphy’s.