An overview of the brewing world in Adelaide and Australia

Ales of All Kinds

Ales have traditionally been used to describe beer that has been made without the use of hops. Over time though the name ale has been used as a name for a beer that uses a type of yeast that works best with a high temperature and ferments at the top of a fermenting vat rather then the cooler lagers where the yeast does it’s converting work near the bottom of the fermentator.

The truth is that most yeast that brewers use today are more likely to be a mix between top and bottom fermentating yeasts which are more likely to settle around the middle.  Ales traditionally complete fermentation faster and produce a more fruity complex flavour as a result of the higher temperature of the fermentation. The label, ale, to describe top fermenting beers or indeed Strong Belgiums or 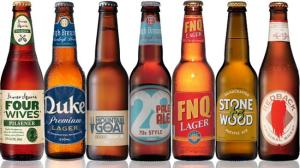 German beers is something that is a relatively new concept that only came about because international beer styles started to gain in popularity in places such as the United States and England in the 1980’s thanks to people like Michael Jackson.  So the end result is that ales are often used to describe a wide range of beers across the taste spectrum and with their more complex and fruity characters they are often the style of choice for people who profess to be a beer geek, unless they walk the path to the dark side.

To learn more about ale, especially real ale check out the work of CAMRA (Campaign for Real Ale)